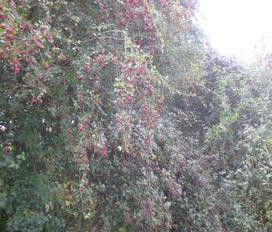 Old craft is a term used advisedly since, although modern hedge laying came about as a result of the Enclosures Act in the early 1800’s, Julius Cesar is reputed to have found woven hedges, made of several stems, in Gaul (France) as long as 2000 years ago.
Hedge laying almost died out in the 20th century, especially in the late forties and fifties.
The craft has only been kept alive by the ploughing match societies who continued to run annual competitions albeit, sometimes with as few as four entries.

In Sussex generally the entrants were generally older men such as Jim Woolven (mentioned above), George Rhodes, Dick Baker and Charlie Tunks. Occasionally sons, as in the case of Peter Tunks and others like Des Whitington, Ron Mouland and Les French, followed their fathers.

History of the Society 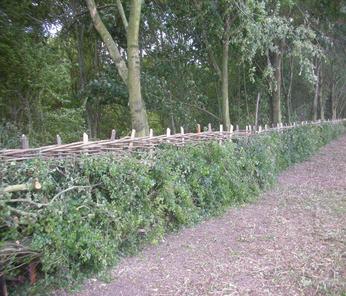 In 1960 Mr Douglas Bunn, who at the time was setting up his Hickstead Jumping Course, wanted tall hedges laid. He asked his contractor, Mr Fish of Henfield, to undertake this work, only to be asked by Mr Fish, “Where are you going to find a hedgelayer these days?”
The reply he received was “go to the West Grinstead Ploughing match and engage the first prize winner”.

So it was that Jim Woolven came to Hickstead, thereby keeping alive the old craft of laying a hedge.

The Society was formed to bring together many hedgelayers who were enjoying their craft and competing at local ploughing matches.

In 1984 at a ploughing match several hedgelayers decided to form a society dedicated to maintaining and
reviving the craft, and to promote hedge laying in the South of England.

Starting with twelve members, the society now has over one hundred members. The society attends many
agricultural shows and countryside events. It holds regular training events in coppicing and hedge laying,
plus it’s annual Hedgelaying Competition. 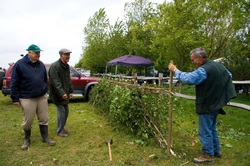 To contact the Secretary by email, please copy and paste our email address into the address bar on a new message, thesouthofenglandhedgelayers@googlemail.com